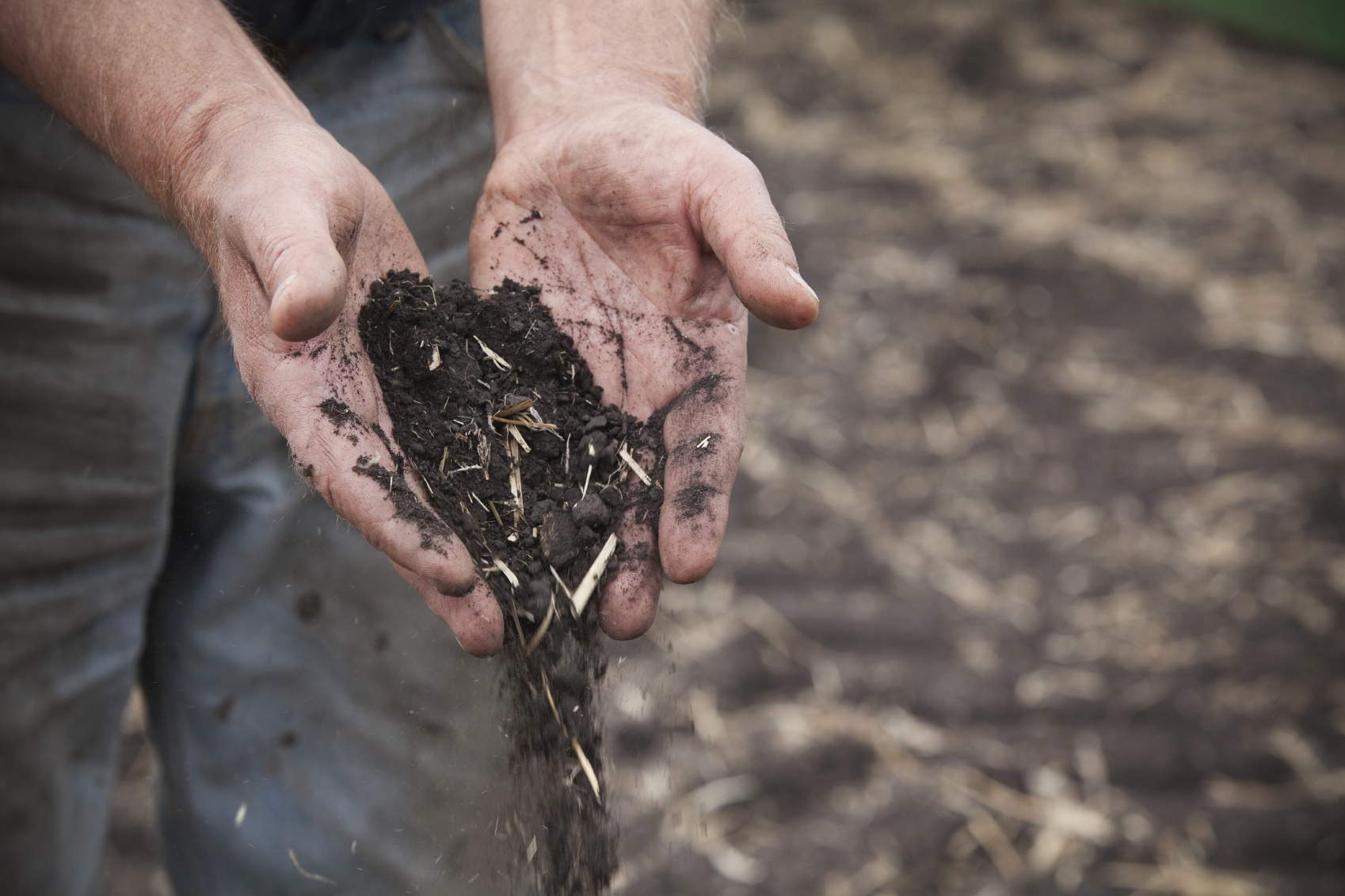 Several centimeters of topsoil per year can form under favorable conditions, which good management can create.

The most meaningful indicator for the health of the land, and the long-term wealth of a nation, is whether soil is being formed or lost. If soil is being lost, so too is the economic and ecological foundation on which production and conservation are based.

In little over 200 years of European land-use in Australia, more than 70 percent of land has become seriously degraded (Flannery 1994). Despite our efforts to implement 'best practice' in soil conservation, the situation continues to deteriorate.

Annual soil loss figures for perennial pastures in Tablelands and Slopes regions of NSW generally range from 0.5 to 4 t/ha/yr, depending on slope, soil type, vegetative cover and rainfall (Edwards and Zierholz 2000).

These figures probably underestimate the total amount of soil lost. Erosion can occur at much higher rates during intense rainfall events, particularly when groundcover is low. Areas which have been cultivated (whether for pasture establishment or cropping) are more prone to soil structural decline.

Under bare fallows in the northern part of NSW, soil losses in the order of 50 to 100 t/ha/yr are common, with losses from individual rainfall events of 300-700 t/ha recorded in some situations (Edwards and Zierholz 2000).

If productive soil continues to be lost, debates about the optimum enterprise mix, pasture species, fertiliser rate, percentage of trees, or any other 'detail' over which we seem to argue endlessly, are irrelevant. They amount to re-arranging the deck chairs on the Titanic.

Research efforts in the soil science arena have concentrated on reducing the rate of soil loss. The concept of building new topsoil is rarely considered.

In order for new soil to form, it must be living. Life in the soil provides the structure for more life, and the formation of more soil. Building new topsoil is much like building a house (Bushby 2002). A good house is one which is comfortable for the occupants. It requires a roof, walls and airy rooms with good plumbing. Soil with poor structure cannot function effectively, even when nutrient and moisture levels are optimal (Bushby 2002).

The roof of a healthy soil is the groundcover of plants and plant litter, which buffer temperatures, improve water infiltration and slow down evaporation, so that soil remains moister for longer following rainfall. The building materials for the walls are gums and poly-saccharides produced by soil microbes. These sticky substances enable soil minerals to be glued together into little lumps (aggregates) and the aggregates to be glued together into peds. When soil is well aggregated, the spaces (pores) between the aggregates form the rooms in the house. They allow the soil to breathe, as well as absorb moisture quickly when it rains. A healthy topsoil should be about half solid materials and half pore spaces (Brady 1984).

Friable, porous topsoils make it easier for plant roots to grow and for small soil invertebrates to move around. Well-structured soils retain the moisture necessary for microbial activity, nutrient cycling and vigorous plant growth and are less prone to erosion. Unfortunately, soil structure is very fragile and soil aggregates are continually being broken down (Bushby 2001).

An ongoing supply of energy in the form of carbohydrates from actively growing plant roots and decomposing plant litter is required, so that soil organisms can flourish and produce adequate amounts of the sticky secretions required to maintain the 'house'.

The rates of soil formation provided in the scientific literature usually refer to the weathering of parent material and the differentiation of soil profiles. These are extremely slow processes, sometimes taking thousands of years.

Topsoil formation is a separate process to rock weathering and can occur quite rapidly under appropriate conditions. In fact, soil building occurs naturally in most terrestrial habitats unless reversed by inappropriate human activities, or prevented by lack of disturbance.

The challenge for the regeneration of our soils, whether used for production or conservation, is to find ways to implement optimum levels of disturbance to restore soil building processes. The extent, frequency and timing of these disturbances need to be varied in accordance with the requirements of different plant communities and prevailing climatic and seasonal conditions.

Livestock movements based on short pulses of intense grazing followed by adequate recovery can be used as a tool to prune grass roots and feed the soil biota, trample litter, improve soil surface condition, increase biomass and improve biological diversity above and below ground (Savory 1988, Earl and Jones 1996, Jones 2000).

In some situations pulse grazing is more effective when combined with 'pasture cropping', a technique in which annual grain or fodder crops are direct-drilled into perennial groundcover (Cluff and Seis 1997, Jones 1999). This one-pass operation disturbs about 10% of the soil surface, creating localised areas of improved aeration, moisture infiltration and mineralisation. The rapidly growing crop provides a readily available carbohydrate source for microbes in the rhizosphere, stimulating levels of soil biological activity.

The late P.A. Yeomans, developer of the Keyline system of land management, recognised that the sustainability of the whole farm was dependent on living, vibrant topsoil.

The formation of new topsoil using Keyline principles, at rates not previously considered possible, was due to the use of a tillage implement designed to increase soil oxygen and moisture levels, combined with a rest/recovery form of grazing and pasture slashing, to prune grass roots and feed soil biota. Yeomans was able to produce 10 cm of friable black soil within three years, on what was previously bare weathered red shale on his North Richmond farm (Hill 2002).

Bennett (1939) calculated a rate of topsoil formation of just over 11 t/ha/yr for soils in which organic material was intermixed into surface layers. In situations where plant root mass is high, rates of topsoil formation of 15-20 t/ha have been indicated (Brady 1984). Healthy groundcover, high root biomass and high levels of associated microbial activity, are fundamental to the success of any technique for building new topsoil.

If the land management is appropriate, evidence of new topsoil formation can be seen within 12 months, with quite dramatic effects often observed within three years. Many people have built new topsoil in their vegetable or flower gardens. Some have started to build new topsoil on their farms. If you have not seen new soil being formed, make a point of doing so.

The material which today is commonly regarded as 'soil' is usually only a compacted residue of rock minerals. Healthy topsoil consists of minerals plus air, water and living things such as plant roots, microorganisms, insects and worms and the organic materials they produce. It is through the re-instatement of the missing components that new topsoil is formed.

There are six essential ingredients for soil formation.

To be covered with healthy plants and decomposing plant litter, soil needs to be managed with appropriate disturbance regimes (6) There is little information available as to how to increase the levels of air, water and organic materials in soil. For this reason, components 5 and 6 of the soil building checklist tend to be overlooked (see soilfoodweb.com.au). That may explain why many people believe that new topsoil cannot be formed.

One has to wonder, how did all the topsoil get here in the first place? We know how quickly we lose it when we ignore the fundamental importance of components 5 and 6. To turn things around, we need to encourage soil building processes every day in our land management.

Rules of the Kitchen

For all land, whether for grazing, cropping, horticulture, timber, conservation or recreation.

Soil must always be covered with plants or plant litter.
Produce organic matter. Rest groundcover from grazing, or grow green manure crops with minimum tillage.
Graze or slash the groundcover periodically. Use high stock densities for short periods to place organic matter both in and on the soil (root pruning and litter trampling). On pasture cropped land, this may include one or two in-crop graze periods. Green manure crops should be lightly incorporated, although animal impact is the preferred option.

Soil conditions must be such that soil organisms can flourish (Bio-vital). High levels of biological activity are required. Think carefully about the effects of any drenches, pesticides, herbicides and fertilizers you may be using.

The higher the biomass and turnover of plant roots, the faster new topsoil will form. It is the energy from biological activity that drives the process.

Smell an earthy composty smell indicates high levels of biological activity, particularly fungi. The activities of beneficial soil microbes are important for the formation of soil aggregates which give soil its structure, improve porosity and water-holding capacity.

Rising ability Like a good cake, the soil should rise well and feel light and springy under your feet. Can you easily push a screwdriver in up to the handle?

Can we measure it?

If one millimetre of soil is eroded (about the thickness of a 5-cent coin) that represents about 14 t/ha soil loss.

When new topsoil is forming, it will have better structure and will contain more air and more pore spaces than degraded soil, so the bulk density will be less. That is, a given volume of new topsoil will weigh less than an equal volume of non-living mineral soil. The bulk density of healthy topsoil may be as low as 0.5 g/cm3.

In practical terms, a one millimetre increase in the height of new soil would equate to the formation of around 5 to 10 t/ha of organically enriched topsoil.

"If we all postpone taking such action, it is certain that the quality of life of future generations will progressively be degraded as we continue to lose our soils, habitats and other species with which we share this amazing planet. I can do it - I must do it - I will do it"

Dr Stan Parsons introduced me to the concept of building new topsoil, a process of fundamental significance, which is rarely considered.

I am also deeply indebted to Greg Martin (Martin 2001) for his clear explanation of the importance of the intermixing of organic matter in the root zone for high levels of biological activity and for showing me the small mammals responsible for the soil building processes which took place in Australia prior to European settlement.

Allan Savory's profound insights into landscape processes and the development of the Holistic Decision Making Framework for land managers (Savory 1988, Savory and Butterfield 1999) have provided a means by which much of this thinking can be incorporated into improved land management.

Many special thanks to Jim Manwaring and Col Freeman for invaluable comments on this paper. The financial assistance provided by NHT Project BD0444.98 'Ecological and Technical Support for Landcare on Rangelands' is also gratefully acknowledged.