Our EM1 is manufactured in Australia by an EMRO technician regularly to ensure that the freshest product is available to our customers.

Effective microorganisms are mixed cultures of beneficial and naturally occurring microorganisms that can be applied as innoculants to increase the microbial diversity of soils and plant. Innoculating the soil/plant ecosystem with EM cultures has been shown to improve soil quality, soil health, and the growth, yield, and quality of crops.

Effective Microorganisms were isolated from traditional ferments of vegetable materials, such as cabbage and kitchen waste (bokashi). The main organisms typically found in EM are (1) Lactobacillus (about 6 to 8 species), (2) actinobacteria (as low as one to as many as 20 species), (3) purple, non-sulphur photosynthetic cyanobacteria (typically only 1 species, although at times 2 to 3 have been observed) and (4) many, many different types of yeasts, which are the fungi that can grow in facultative anaerobic conditions.

All of the organisms in EM are facultative anaerobes. Their observed benefits in soil, compost or tea are that they produce copious quantities of sticky material, which can result in rapid aggregation and ability to stick to surfaces. Organic acids which may help stabilise pH if soil is too alkaline are also made in high concentrations. But these are not the lower pH, much nastier acids made by non-beneficial species of bacteria and yeasts which grow in more classically anaerobic conditions.

More work needs to be done before regulatory agencies will accept this method for control of human pathogens, but replicated work has been done by both the parent organisation of EM as well as a few studies and many observations by SFI in field conditions. Dairy animals fed EM in their food rations did not have E. coli in their manure. Compost made from that manure never had any human pathogens detectable.

Are there limitations and abuses that people could perform to make EM not work? Sure. We need to document where benefit can always be expected, where it might be questionable and need to be tested, and where benefit will not occur.

Bacterial activity was increased by adding EM, possibly from addition of foods in the EM culture, but also because the high number of bacteria added in the EM product. Total bacterial biomass was decreased at the higher concentration of EM culture used, probably because now a fungal enhancement occurred. When fungi grow, they can compete against bacteria. Actinobacteria were clearly improved by addition of EM, because of the presence of a number of actinobacteria in the ferment. Determination of the effect of these actinobacteria on mycorrhizal colonisation should be performed. Protozoa were slightly increased in both concentrations of EM, but not to a significant extent.

How Does EM work:

Lactic acid bacteria, yeast and phototrophic bacteria contained in EM・1 have the ability to ferment organic substances. Compost fermented and decomposed by EM is broken down in the soil and absorbed by plants. Also, EM contains many useful components to promote plant growth. In aqueous environments, EM decomposes sludge by fermentation and makes it easy for other microorganisms and protozoans to eat the breakdown products. Moreover, in addition to microorganisms, EM contains metabolites produced by various microorganisms and these will activate the microorganisms which already exist in the soil and help to diversify the microbiome. Microorganisms form the base of the ecological pyramid, so when microorganisms in soil are diverse, the ecosystem in the soil will be enriched in various ways, such as an increase in the number of earthworms. A healthy and diverse ecosystem will help to form rich soil.

How do EM products work in the soil?

Large numbers of bacteria exist in the soil. One gram of soil contains anywhere from a few hundred million to several billion microorganisms. Microorganisms are a fundamental component of the ecosystem and facilitate its functioning by breaking down organic substances and circulating nutrients. However, when the quantity of healthy microorganisms in the soil decreases or the balance is disrupted, other living things such as earthworms will be negatively affected and the soil will become impoverished. The diversity of microorganisms contained in EM and the metabolites they produce will increase the number and diversity of microorganisms in the soil. When microorganisms are activated, protozoans and larger organisms such as worms will increase in number and a healthier ecosystem will result. Soil with diversified microflora will inhibit the growth of specific disease-causing bacteria, which help prevent cultivation failure. 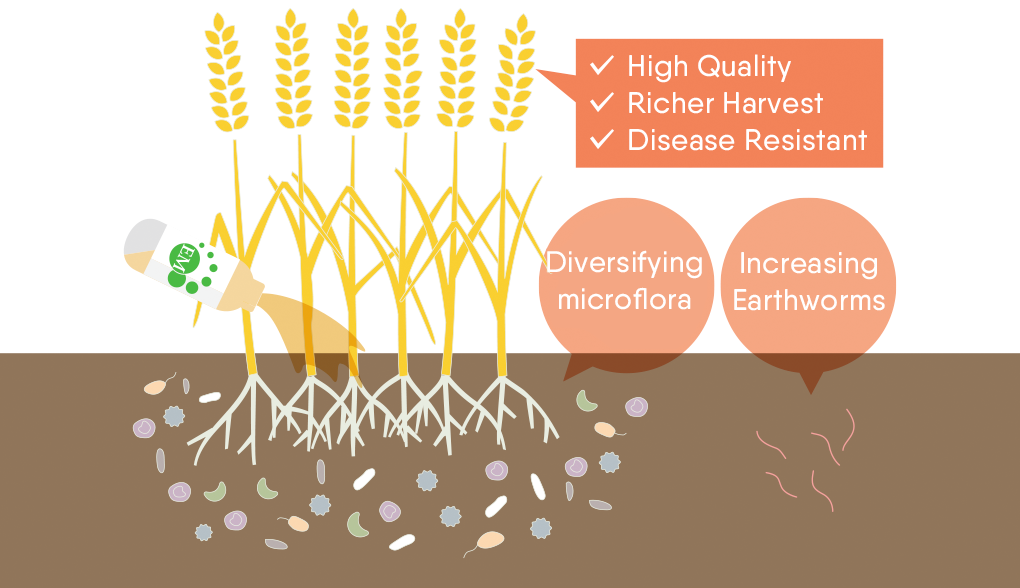 Lactic acid bacteria, yeast, and phototrophic bacteria contained in EM have the ability to ferment organic substances and prevent putrefaction. Therefore, for example, when making compost with EM, putrefying bacteria will be suppressed and, due to the fermentation action of EM, it is possible to manufacture compost with less turning than usual. Also, compost fermented by EM is rich in amino acids and polysaccharides compared with compost produced by the usual methods. EM prevents the production of ammonia during protein decomposition, metabolizing proteins in such a way that amino acids are produced instead. These amino acids can be directly absorbed by plants. Also, under normal circumstances, cellulose will be decomposed and broken down to form carbon dioxide. However, due to the fermentation action of EM, low-molecular polysaccharides will be produced and these will be absorbed by microorganisms and plants. Generally, proteins are synthesized from nitrogen. However, if the plants can directly absorb amino acids from their roots, they can repurpose the energy that would have gone into producing amino acids and proteins, thereby producing fruit with more sugar.

Comparison between conventional way with EM Way to make bokashi 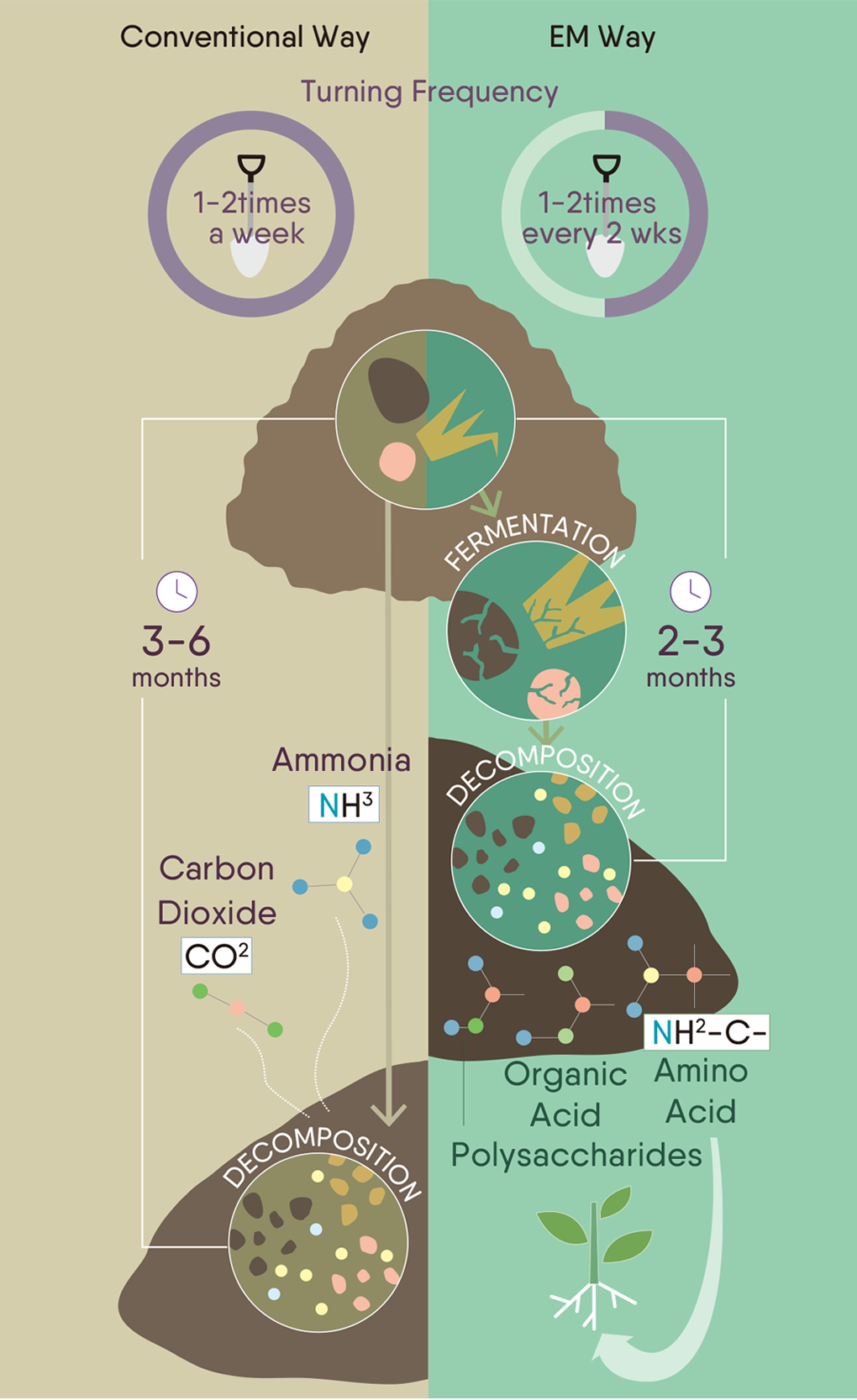 Fertile soil and biodiversity is important for organic farming. However, normally, sophisticated technology and a long period of time is needed to establish a productive organic farm. By actively using beneficial microorganisms, EM products speeds up this process, makes organic farming easier, and also helps to improve the yield and quality of produce.

Application in other fields

EM products that promotes biodiversity have also been applied in the fields of animal husbandry, aquaculture and water purification. In animal husbandry, EM will improve the microbial environment of barns as well as the intestinal flora of livestock and will ameliorate noxious odors. In aquaculture andwater purification, EM will make the ecosystems in water richer. This will improve the self-purification capacity of water bodies and improve water quality.

Allowed in most Certified Organic Systems, ask for non-GMO statement. 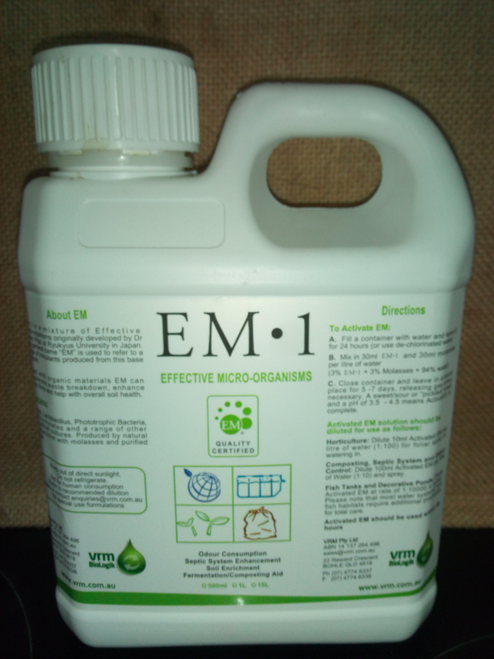